Strengthening the land community in the Arab states

In a region where country contexts vary significantly, the Arab States meeting was an opportunity to see the flourishing and strengthening of a new ILC region as a result of the interactions, debates and realisations made collectively, concerning land governance.

The idea of having an Arab States meeting came to thought over a year ago as ILC discussed the nascent possibility of a reunion of land actors from the wider Middle East and North Africa, coming together in conversation about the contemporary land governance issues in their region.

The role of civil societies in the Arab region

The Arab region is going through a profound transformation where the societies of the different countries, are setting prominent examples of interaction between the State and its people.

The role of the civil society has to be recognised, protected and respected, as it is fundamental to inclusive and prosperous societies. Civil societies play a unique role in the assertion and recognition of individual and collective rights, especially in regards to land. The better the State is able and equipped to interact constructively with civil society, the easier it will be to build a peaceful future in the region.

From Idea to Realisation

The “Local communities and Land Governance in the Arab States” is one of the first meetings of its kind, serving as a launching pad in strengthening the land rights platform in the region bringing together over 60 participants from civil society organizations and NGOs. In partnership with the University of Tafila and the patronage of the Governorate, it was hosted by ILC member Dana and Qadisiyah Local Community Cooperative, without  whom none of this could have taken place.

Filled with enthusiasm, determination and rich expertise of the participants the two-day event helped develop a common agenda in the Arab States, for responsible land governance and management of natural resources as intended in the Voluntary Guidelines and Sustainable Development Goal indicator 2.3.

While we as ILC might have had our own ideas as to where the conversation might head and what conclusions might be drawn from it, we were joyfully surprised as the meeting entirely took a life of its own, fuelled by the dynamism and passion of participants representing such a diversity of experiences in land tenure across the MENA region.

Participants shared accounts of their respective struggles in achieving the recognition of their lands and access to land use for their communities, and in doing so, drew inspiration and encouragement from each other and shared ideas for new solutions together. One of the presenters, Rabie Wahba, explains it is as “a source of enrichment” but also as an opportunity to harness the positive aspects of the diversity and learn how to “defend the rights of individuals and equality in access to land and resources” from different perspectives. 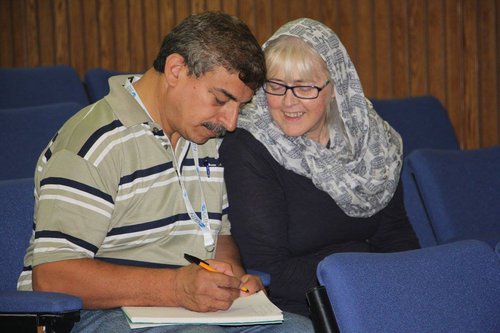 There was a very clear sense that their joint struggles, be they cultural, political or economic in nature, go beyond the current harmful trends regarding land tenure and ownership, affecting communities across the globe. In a sense, this meeting sealed the definition of a new region, uniting them together around a common goal.

Though the vast majority of participants at the Arab states meeting were not ILC members, they became part of the ILC community, as key actors working on land governance issues in their respective countries. A true sense of solidarity and friendship was created throughout the course of this meeting, and though it only lasted two days, by the end it felt like we’d been friends for years.

Closing the meeting, was Yahya Khawaldeh of Dana And Qadisiyah Local Community Cooperative wishing safe journeys to the participants, saying  “until we meet somewhere else, as far as our imagination can take us we express our gratitude to all who participated [in the meeting.]”

It was a pleasure to see the burgeoning of a new ILC region as a result of the interactions, debates and realisations made collectively.  As we all returned home, it felt as though we were returning slightly more emboldened by our new friendships and eager to draw the next steps in our shared journey towards a fairer and more just world.