On the 30th of March 1976, the great transformation of the Palestinians living within the Green Line areas was the first public clash with the military occupation authorities since 1948 in protest against the confiscation of thousands of dunams of privately owned lands. Before the Nakba, the land was a source of livelihood for at least 85 % of Palestinian people. Israeli authorities used confiscation, annexation and settlement as a means to weaken the Palestinian presence and push towards displacement, and in return, the Palestinians considered land a major component in their struggles for freedom, independence, state building, and refugees return. Not only that, land has continued to be a basic means of livelihood for thousands of families in the West Bank and Gaza Strip, as well as in Arab cities, towns and villages within the Green Lin.

The occupation did not only enforce laws of a racist nature, such as the law of nationalism, absentee property, or wasteland, with the aim of weakening the Palestinian presence. But also, increased the practices of expropriation, confiscation and displacement in areas like Naqab and Al-Araqib and also the scheme announced by Prime Minister Benjamin Netanyahu, which is to pursuit with the annexation of 30% of areas in West bank and Jordan Valley.

Today, 45 years after the commemoration of Land Day, the machine of oppression, confiscation, siege and racism over the entire Palestinian land is still operating at a very high rate, and Palestinians are still steadfast and patient in rejecting these measures. It is known that the occupation wants all the land and works and harnesses most of its capabilities to reach this goal, taking advantage of the world's silence and its preoccupation with its economic and health crises.

It has been 40 years since PARC's establishment. Which was inspired by the thought and vision of Land Day and people working on it. PARC activities and projects extended to every Palestinian village, town, camp and city. These projects and activities are believed to be a duty towards Palestinian people and their cause.

From these starting points, PARC has worked during its past years to reclaim and rehabilitate 120,000 dunams, in addition to constructing a network or agricultural roads of approximately 3,500 km, and it has also worked on establishing individual and collective irrigation networks exceeding 500 km in length and planting 3 million seedlings. These activities were carried out through PARC teams, partners and thousands of volunteers.

The Arab Centre for Agricultural Development - ACAD works to strengthen support for Palestinian farmers and youth in all governorates of the country, as it has established many agricultural projects aiming to achieve and sustain agricultural development in the Palestinian countryside in order to preserve it from the Israeli confiscations of Palestinian land. 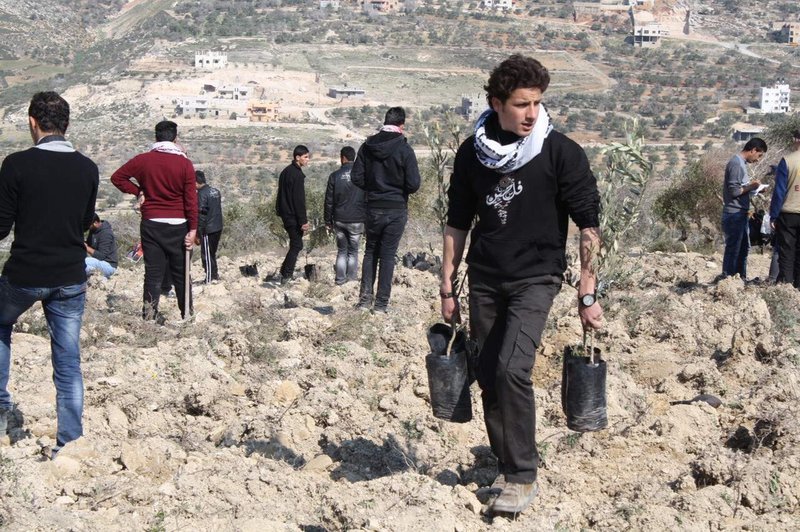 The deterioration of the agricultural situation in Palestine is attributed to a group of reasons that can be summarized as follows:

The Israeli occupation destroyed large areas of agricultural lands, which exceeded 120,000 dunums in the West Bank and Gaza Strip during the past twenty years, in addition to cutting hundreds of thousands of Fruitful and forested trees, which are approximately 2 million trees in the West Bank and Gaza Strip. Also, the Israeli occupation closing large areas in front of the citizens and denying them access. It is estimated that the area that Palestinians cannot reach is 38% of the West bank. Under the claims of annexation and segregation wall, settlements, areas threatened with confiscation, or closed military areas for training purposes ... etc.

Another reason is the low government budgets allocated for the Palestinian agricultural sector, which did not exceed 2% of the general budget of the Authority in some years. Also, the large decline in donors’ contributions to supporting area C which are the lands that are often targeted for development projects as a result of Israeli practices. At another level the urban expansion at the expense of agricultural lands, desertification of agricultural lands resulting from the wrong and intensive use of agricultural pesticides, agricultural expansion in marginal lands that are suitable for grazing only, and therefore cultivating them and carrying out agricultural operations such as ploughing leads to acceleration of the erosion of their soil and thus the increasing desertification.

On this glorious occasion, “Land Day,” we renew our promise to continue supporting farmers in the Palestinian rural areas, the Bedouin areas and the areas threatened by settlement to enhance the steadfastness of farmers and land owners through the establishment of productive projects for women and youth and the cultivation of fruit trees and other important crops that enhance the presence of farmers on their land.